I ring Ruth on her birthday. We have had it planned for ages. She couldn’t speak earlier because she is doing a degree in business and management studies and today, she says, she no longer has to revise. Suddenly I am back in the classroom, its Maths,1983, we are sitting together and I’m looking out of the window! We didn’t fail Maths, the whole class got put down to study for a lesser exam, the whole class! I deserved to be put down but she didn’t. We didn’t mention this in our chat.

She is concerned that this call is going to cost me a fortune. I don’t care, we haven’t spoken on the phone since we were 14! Her voice hasn’t changed and I know that her looks haven’t either because she came along to a small school reunion we had when I was last in the mother country in 2012.

We go all around the houses in our conversation, we have a lot of news to catch up on. I’m kicking myself now for not talking about what happened to everyone in Maths. One of our classmates was having a baby as we were studying trigonometry and I forgot to marvel with her that the baby would now be 31!

We talked tattoos. She tells me that she went for a fifteen pound tattoo from a guy in his upstairs spare room. She hoped for a rose, but left with a swallow (!)

Years and six hundred pounds later, she had it removed. She tells me to Google her daughter’s tattoo which Ruth is not pleased about. There’s a storm outside and the electricity keeps flicking on and off. I was sitting here a moment ago googling ‘don’t open dead inside’ and now I am completely scared rigid!

For an hour on this, her birthday, we talk about her cats killing moles (cats are mean like that, I say), the dog bites on her legs that I still remember vividly, M&S cocktail pork pies, M&S knickers, the Australian accent being based on both Essex and Suffolk, Literary Speed Dating which I did at the weekend, Castleton in Derbyshire, why we called our children what we did, our classmates, going back to work and her son’s imaginary life that he used to describe aged 3.

As we sign off I tell her that I’ll send her a link to a TV programme about a boy who was born knowing minute details about the life of an American pilot who died in the war. It was thought at first that he had an imaginary life with a vivid imagination but now they believe that he is the reincarnation of the pilot. Now she is freaked out!

Here we are with our dear departed form teacher Mrs Webster in 1980, Ruth is top left, I’m far right. 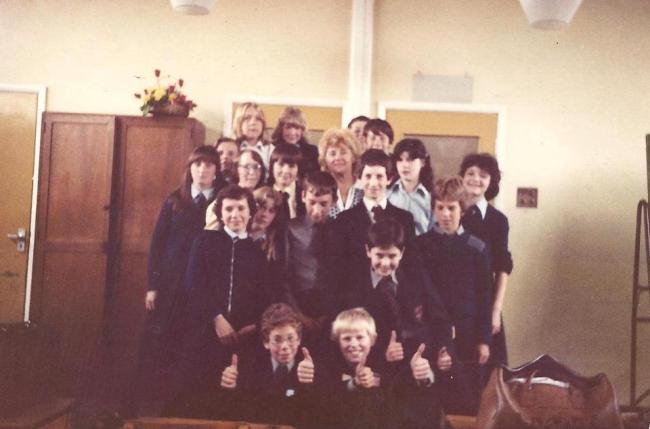