Two years ago, Bernadette posted a photo of an intricately knitted dress on her facebook page. She had knitted it herself, it was a skill that I had no idea she had. I had never seen anything like it done on two pins before. I rang her and said ‘I began knitting a scarf five years ago but now it looks like a dog blanket so that’s what I have decided it is but I’m embarrassed by all the holes. I am embarrassed full stop.  Can you help me?’ She is more than happy to help. I tell her that it feels like I’m asking David Beckham to teach me how to catch a ball. It’s perfect that she is 23 on the blog then!

Bernadette has been the most patient teacher you could wish for. I tie myself in knots trying to work out purl, tension and why I have 94 stitches when the pattern states 91. Bernadette’s doorbell rings and in I walk with my pathetic problems around yarn. She doesn’t appear to mind that she has to talk to me like I am nine years old. At the moment I am knitting a skiing hat for James and then I intend to knit a skiing holiday to go with it.

Last summer Bernadette organized a very successful exhibition called Tactile Pleasures. It got everyone talking. Today, when I saw her with a dropped stitch she told me to make my blog about her up but no, I am going to ring her and get the extraordinary story of her trip to Austraia down in print.

She picks up the phone.

‘Yes and it’s normally only dead people who ring at this hour’ she replies.

‘You know, finding out that someone has died.’ I’m relieved, especially in the light of Ruth 22/365’s daughter’s zombie tattoo.

I tell her that my Dad’s death wiped the slate clean with regard to bad news.

Bernadette’s voice starts to crack when she tells me that she will never get over having to tell her Dad that her brother had died. She relives the nightmare too many times.

I miss the intimacy of phone calls like this. We no longer delve into each other’s hearts to this level. Only a landline conversation, with one of the participants in bed can unearth this side of our lives. I’m beginning to think that we could all put each other’s worlds to rights, if only we’d put the phones back where they were.

Bernadette’s parents and brother left Ireland for England, then England for Australia. They didn’t intend to leave baby Bernadette behind. Her maternal grandmother said that at six months old, perhaps the baby was too young to fly. So she stayed in Ireland with her grandparents until she was nine years old. She’d still be there now if her mother hadn’t come over to visit, dressed her in a mint green dress with a black zigzag edging and patent shoes and driven her to see her paternal grandparents.

On the way home her mum turned left to Shannon airport. ‘I’m taking you to Australia to see your father’ she said.

‘No you’re not’ said Bernadette.

‘Well you can get out and run home yourself then.’

So Bernadette got out of the car and began running. She remembers seeing the shine of her patent shoes under her dress and worrying that she might scuff them. Her mum caught up with her and they caught the plane. Bernadette had none of her belongings and never had a chance to say goodbye to the grandparents who had raised her.

When she returned years later and her grandparents were long dead of broken hearts, people would tell her that they remembered the day when her grandmother received the telegram, she opened it in the Post Office. It said Bernadette was now in Australia.

Her grandmother and her aunts had knitted around her as she grew up. Bernadette, with her speciality yarns, does what I call ‘extreme’ knitting.

I couldn’t make it up. 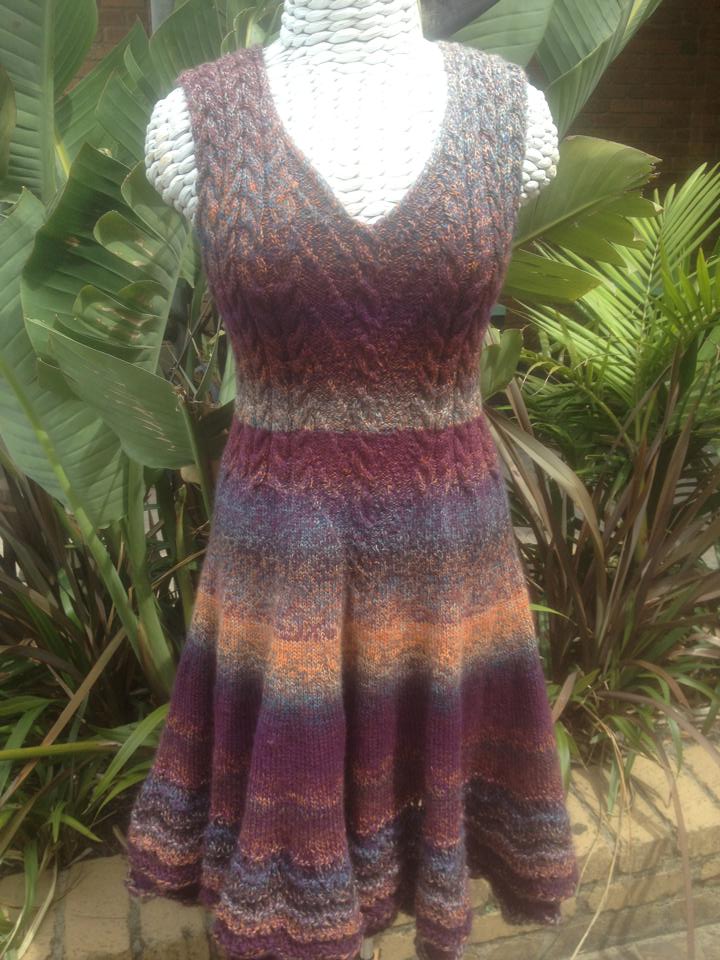