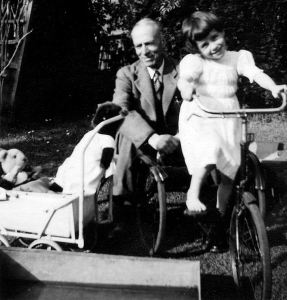 Audrey and her dad.

I used to babysit for the Vaughans. I seem to have babysat everyone! I remember in 1981 having Audrey’s small daughter on my knee watching the Bob Marley celebration concert at way past midnight. Later her husband would drive me home in his formula one car, well it felt like that, compared to my Dad he drove SO FAST!

Audrey’s husband, Martin, and my Dad were partners in the days before the word ‘partner’ winked at ‘spouse’.They were doctors at Measham Medical Unit and with that came celebrity. To add to that, Martin would put on a comic turn at the surgery Christmas party every year, he was born for stand-up, and I cannot get the memory of him wearing a leopard skin thong out of my head. Did I make that up? It must be true because I remember all the staff crying with laughter. Perhaps I could credit him with inspiring me to find a Martin of my own!

I had a long and interesting chat on the phone with Audrey and made copious notes that I find hard to do justice to in a blog post of around 600 words.  She is very enthusiastic about life and has changed direction in terms of her career and hobbies many times, always throwing herself completely into what she is doing. When we met when I was a child, she was mother of one with one on the way and a radiographer. Later she became a mother of three and a counsellor. She is an artist, she drums on an African drum in a group, she is a family tree finder, a cyclist, she has just become interested in the Quaker way of life and through all of that she has been a doctor’s wife and that in itself is a full time job!

Audrey and Martin visited us in Australia and she was the first person to encourage me to join Facebook. At the time people seemed to have very strong views about social media but Audrey put forward all the good points very well. During our 80 minute call we talk a lot about her finding her extended family because of the internet and the abject joy that she has felt from that. We also chatted about her dad, his death when she was a child, and I learned things on the phone that I hadn’t known in forty years of friendship.

I tell her that it was in her kitchen, when my dad was talking to Martin, that I found out (through eavesdropping) that my great grandfather had committed suicide when the second world war was declared; he could not live through another war. My maternal grandmother had only told my dad in the whole world, and when he realised that I had been listening in, he told me to swear to never mention it again. But with the relaxing of stigma towards these things, I did mention it when my dad was in the late stages of cancer but by then he couldn’t remember.

She told me  that she is enjoying discovering all about the Quakers. She likes the way that the Quakers hold people in the light, instead of praying for help for them in the conventional way. She said that she took a bit of inspiration from my blog and is taking one photo of light every day. She comments on my blog being an artistic process; you make a start, you can only plan so far, and as it progresses you come across different aspects that you hadn’t expected and you have to modify your ideas to accommodate the trips and the turns.

I hadn’t planned to spend so long phoning my friends. It isn’t going to happen in a year because I can’t race through all these phone calls and not expect them to have some sort of effect on me. I really need time between each one, so far it’s been too enjoyable to rush.

Audrey and Martin Andrew, baby Sarah and Jonathon, open the Church Fete, Swepstone, with the vicar on the left (it sounds like the beginning of one of Martin’s jokes!)