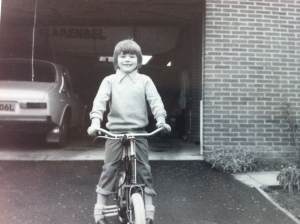 His first bike, my first camera.

But Damian wins the prize for most time elapsed between phone call and blog post. Three weeks! I didn’t take any notes because it wasn’t going to be a blog call, it was to be a genuine ‘Are you OK?’ call. Word had got to me that big changes were happening in Damian’s life and my first thought was to Facebook him, my second, to phone him.

We were born just three months apart and he had the cool parents- my Mum’s rebellious brother who worked for Levi’s and the beautiful mother whom I used to dream was mine because we shared the same hair colour. Damian, or ‘Geranium’ as the boy next door called him, was the oldest and a boy, I was the third girl and I felt from a very young age that having him on my team was a good idea. I sometimes called him ‘Daisy’.

When we were three (1970) and at a family party, the adults raised their glasses and said ‘Cheers to the Commonwealth Games’. We thought this was the most hilarious thing we had ever heard, so repeated it over and over until it became our motto.

We visited our grandmother as a pair and she set us on gardening and painting tasks from a very young age, feeding us enough Parkin and Flapjack to sink ships. Unpolitically correctly we spent a great many weekends chasing imaginary Germans around the village and creating bunkers, then we would sit down and  tell each other tall stories and long cumbersome jokes where the punchline had to be explained. We rode our bikes ’til the tyres went flat, played endless board games, ‘Wheel of Fortune’ being the number one favourite and when Damian’s dad came to collect him, I ran next to the car to the end of the road, waving as he disappeared out of sight. After a couple of years of coaxing, Damian’s little sister joined our team and then his very little sister Eleanor (Belham 3/365) but by then we were at the ‘Dallas’ watching stage of our lives and she had to watch us watching telly.

Our grandmother used to tell me that her favourite ever memory was seeing Damian and me at 5 years old, on November the 5th, chatting and carrying a lantern down a dark lane together, on our way to light the bonfire. I knew her life had been an interesting one and in my teens would see her wistful face as she repeated this and I’d think ‘Is that really your best memory, Nanna? Just Damian and me walking along in our duffle coats?’

My chat with Damian lasted an hour but could have gone on for three. It was on a mobile. a rule breaking mobile, because he can’t get near to landline just now. He suggested that I turn it into the blog chat; not as a money saving exercise, I think it was more of a dare.

Talking to him for an hour was like an enormous childhood treat.

I pondered what happened to us that we lost touch so badly having been cousins and close for so long. Children happened, that did have an effect, and also we both moved to different countries- he to New Zealand, me to Australia (cheers to that!). I think Facebook was also a factor too as he had a page but hardly used it and too often we think that everyone is touch via this mini broadcasting means, but they’re not. It can be a very one sided communication option.

Listening to his voice takes me right back to a tme when the phones rang non stop; bells interrupting every activity; adults on constant alert, everyone getting told to shush! Really the phones were another reason for us to get out of the house and play.

We shared revelations and stories as if we were five again and I was on an adrenaline high for ages afterwards, running next to his car in my dreams.

The duffles are gone but the lantern burns just as bright. 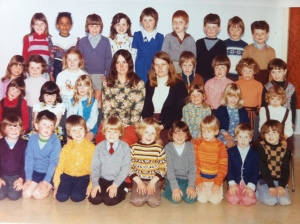 Damian and me, matching smiles, back row.